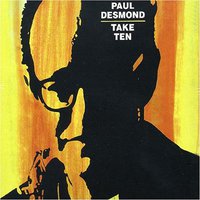 Paul Desmond (November 25, 1924 – May 30, 1977), born Paul Emil Breitenfeld, was a jazz alto saxophonist and composer born in San Francisco, best known for the work he did in the Dave Brubeck Quartet and for penning that group's greatest hit, "Take Five". He was not only one of the most popular musicians to come out of the West Coast's "cool jazz" scene, but also the possessor of a legendary and idiosyncratic wit.
In addition to his work with Brubeck he led several of his own groups and did significant collaborations with artists such as Gerry Mulligan, Jim Hall and Chet Baker. After years of chain smoking and general poor health, Desmond succumbed to lung cancer in 1977 following one last tour with Brubeck.