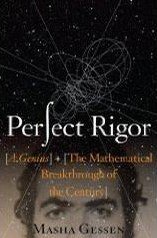 The true story of a mathematical mystery, a million-dollar prize, and the fate of genius in today's world.
In 2006, an eccentric Russian genius named Grigori Perelman solved Poincare's Conjecture, one of seven great unsolved mathamatical mysteries, the solution to any of which the Clay Institute, founded by Boston businessman Landon Clay in 2000 to promote mathematics, promised a million-dollar prize. It is widely expected that the first Clay Prize will be awarded to Perelman in October 2009, and it is equally widely expected that he will decline it. Why?
Masha Gessen set out to find out. In the manner of Nabokov's Real Life of Sebastian Knight , or more recently and accessibly, Sylvia Nasar's A Beautiful Mind , or even Elizabeth Gilbert's The Last American Man , Gessen explores the nature of Perelma's mind and the reasons for his unusual, increasingly isolated behavior.
Drawing on interviews with Perelman's teachers, classmates, coaches, teammates, and colleagues in Russia and the US, Gessen has constructed a gripping and tragic tale that sheds rare light on the nature of genius in the modern world.