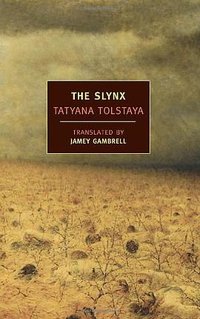 New in Paperback
“A postmodern literary masterpiece.” – The Times Literary Supplement
Two hundred years after civilization ended in an event known as the Blast, Benedikt isn’t one to complain. He’s got a job—transcribing old books and presenting them as the words of the great new leader, Fyodor Kuzmich, Glorybe—and though he doesn’t enjoy the privileged status of a Murza, at least he’s not a serf or a half-human four-legged Degenerator harnessed to a troika. He has a house, too, with enough mice to cook up a tasty meal, and he’s happily free of mutations: no extra fingers, no gills, no cockscombs sprouting from his eyelids. And he’s managed—at least so far—to steer clear of the ever-vigilant Saniturions, who track down anyone who manifests the slightest sign of Freethinking, and the legendary screeching Slynx that waits in the wilderness beyond.
Tatyana Tolstaya’s The Slynx reimagines dystopian fantasy as a wild, horripilating amusement park ride. Poised between Nabokov’s Pale Fire and Burgess’s A Clockwork Orange , The Slynx is a brilliantly inventive and shimmeringly ambiguous work of art: an account of a degraded world that is full of echoes of the sublime literature of Russia’s past; a grinning portrait of human inhumanity; a tribute to art in both its sovereignty and its helplessness; a vision of the past as the future in which the future is now.