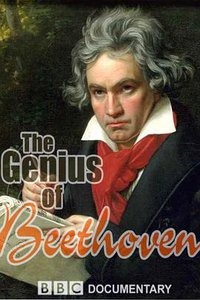 This series was made as a result of the BBC's hugely successful and popular series "The Genius of Mozart". Both series follow the same format, a cross between a drama and a documentary (docudrama), each series is made of three episodes of an hour each, and each is mixed with insightful pieces of narration by the popular conductor/composer/presenter Charles Hazlewood.
"The Genius of Mozart" was a big hit for the BBC, attracting masses of enthusiastic viewers of all walks of life. With this in mind you would think that a similar programme based on Beethoven would attract a similarly popular response. However this was not the case. This series was not viewed by a large audience, there have been no repeats or DVD releases and I was shocked to visit it's IMDb page to discover there were absolutely no user comments, (I write this now wondering if it will ever be read).
In brief, I remember watching this series and being absolutely blown away, It was so powerful I can still remember it in detail. In my opinion it is amongst the best work the BBC have ever produced and I am extremely saddened that very few people experienced the same joy I did from this series. I think "Beethoven" has become a lost gem and I will use the remainder of this user comment to argue my case.
The series was beautifully photographed and directed. The series was filled with a beautifully desaturated palette (with a prominent ochre for interior scenes) which gave a stark, imposing temperament. Along with this there were wonderful intersections with diffuses of aged yet colourful soft focus imagery, giving a romantic yet nostalgic feel, like a lost love. It was a breathtaking contrast of these romantic diffuses with desaturated scenes, to me it evoked Beethoven's isolation and difficulty to keep a grip on reality.
The story and dialogue was fantastically well written. It powerfully evoked the turmoil, isolation and despair of Beethoven. It was a highly accurate historical portrayal along with a caliber and sophistication of writing which seemed to transcend it's historical obligations giving a highly emotional, gritty and moving experience.